Why do we always have to play the side part? Why aren’t we the protagonist of the story?” asked Debbie Lum at this year’s 2022 Kuo Family Lectureship. Lum, an award-winning filmmaker, explored how historic under-representation of Asians and Asian-Americans in mass media perpetuates one-dimensional stereotypes. “I am 4th generation but despite this, we are perpetually seen as foreigners,” Lum said. “I think this is due to the lack of three-dimensional stories about our communities.” 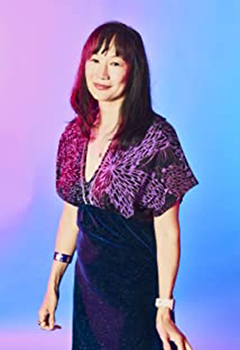 As an example, Lum showed a 2017 ad released by Cigna (“TV Doctors of America”) encouraging patients to see regularly see their doctors. The ad was notable in that none of the TV actors portraying heroic doctors were Asian. “We need to not be shy and tell our stories,” she said, noting that it has been very challenging as a filmmaker because many Asian-Americans are uncomfortable publicly sharing their stories.

In her recent documentary, “Try Harder”, Lum followed five seniors at Lowell High School in San Francisco through the process of college admissions. A highly competitive and selective admission preparatory high school, Lowell is on the frontlines of the ongoing debates about what it means to be an Asian-American student today. While a small fraction of the students in the school’s early days, Asian-American students now make up the majority of the student body. Lum was drawn to Lowell because it was one of the few places where being Asian-American is the norm, not the exception. “I wanted to understand what it meant to be a teenager in this Asian-American high school,” she said. “Our community really needs to share our stories and to write and laugh about contradictions.” Lum elicited knowing laughs from the audience when she asked about the so-called the Asian F (i.e., a B+ grade) or described Lowell’s informal motto (‘Lowell High School, where your best has not been good enough since 1856.’)

Nonetheless, Lum noted that the competition and stress of being admitted to the highest tier of colleges and universities has never been higher. The stakes are particularly high for Asian-American students, who are often seen as over-achieving and face implicit bias from admissions officers. Lum asked, “When you’re a young Asian-American applying to college, and you have to check the box to identify yourself, you know it’s a count against you. What does this mean to your identity?”

Lum concluded her talk by exploring the connection between identity, wellness, and mental health. Referencing the cluster of suicides by high school students in Palo Alto, California in 2009-10 and 2014-15, Lum noted that “When you talk about wellness, and promoting mental health… without inclusion, without equity, without belonging and being part of a story, you really can’t find a sense of satisfaction.