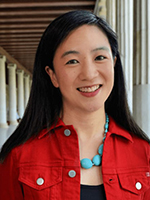 In the lecture, titled “People, Power, and Politics in 21st c. America,” Dr. Han spoke of problems in power, where the misalignment between the authority to act and the motivation to create change often hinders social movements. She demonstrated throughout her talk how successful social movements result from the reorganization of resources to align authority and motivation to change.

She told the story of Alex Watters, one of the most impactful campaign organizers for the Obama election campaign whose success was attributed to his ability to move people not only to act, but also to commit to the campaign on a deeper level – also known as transformational organizing.

Dr. Han’s overarching message illustrated the need for a social movement to have broad reach and depth in order to be successful, which she explained occurs through the mobilization and organization of engaged participants. Dr. Han’s talk complemented Dr. Tracy S. Wang’s presidential address, reiterating the importance of every individual’s involvement in the change we wish to see in our society and the impact of allyship.